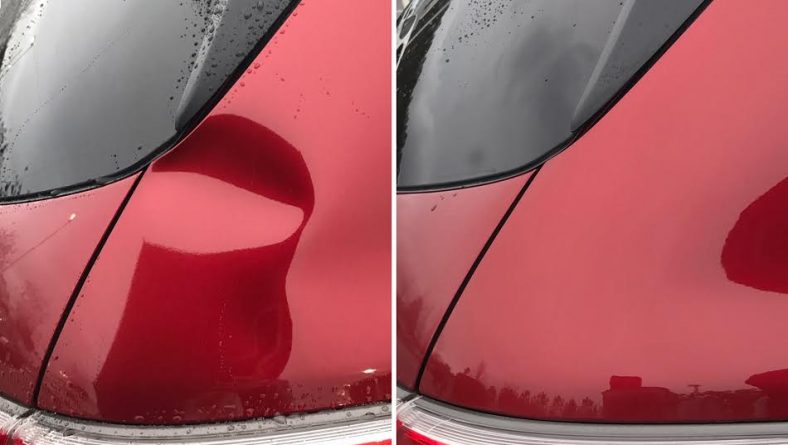 Paintless dent repair (PDR), also known as paintless dent removal, describes a method of removing minor dents from the body of a motor vehicle. A wide range of damage can be repaired using PDR as long as the paint surface is intact. PDR may be used on both aluminum and steel panels.

The most common practical use for PDR is the repair of hail damage, door dings, minor creases, large dents and bodylines damage.

The method can also be utilized to prepare a damaged panel for repainting by minimizing the use of body filler. This technique is currently known as “push to paint” or “push for paint”.

Limiting factors for a successful repair using PDR include the flexibility of the paint (most of today’s refined automotive paint finishes allow for successful PDR) and the extent to which the metal has been stretched by the damage, which depends on the thickness of the metal, the cuvature or flatness where the damage occurred and the intensity of the impact. Generally speaking, the shallower the dent, the greater the likelihood of paintless dent repair being a suitable option. Even dents several inches in diameter can be repaired by this method as long as the metal and paint are not stretched. Most experienced technicians can repair a shallow large dent or crease to an acceptable level, but very sharp dents and creases may not be suitable for PDR.

Paintless dent removal was invented around 1930s at car assembly plants, and has been popularized much later.

The most common PDR techniques utilize metal rods and body picks to push out the dents from the underside of the body panel. Glue and specially designed tabs may be used to pull out the dents from the outside of the panel. Fine tuning the repair often involves tapping down the repair to remove small high spots. Quality technicians can blend high spots to match the texture of the paint called orange peel. Pushing too hard can create high spots that cause the clear coat to split or crack. Experienced technicians can avoid cracking or chipping with the use of heat, although a re-painted surface most likely will crack. When damage is so great that body filler is necessary, a PDR technician may “push to paint”, resolving most of the damage before minor filling, sanding, and painting, thereby saving time and cost.

The process of paintless dent repair requires a technician to manipulate precise locations of metal to the correct height, which can only be observed by the use of a PDR reading instrument such as a paintless dent repair light. Fluorescent or LED lighting, or in some cases a reflection board, may be used to visualize the deformation of the dent and to aid the technician in locating the tip of the tool being used to push the metal. Without a reflection from a light source or board to read the dent, the fine detail of the process may not be suitable to the technician.

Get your Discount Now!

*Not valid on hail damage